First thing’s first: legislation passed in 2015 making it 100% legal to hunt with a suppressor in Maine.  The State of Maine, however, is not making it easy for sportsmen to go about hunting with a suppressor.  As a Mainer I am embarrassed by this mishandling of our freedom.  In this post, I cover the fact that it’s near impossible to find information on how to legally hunt with a suppressor in beautiful Vacationland, as well as provide you with clear and simple information on how to acquire the permit to hunt in a more hearing-safe manner.

As a guy who dislikes articles and literature that make you sign up before you may read–or force you to jump through hoops just to get the damn thing you showed up for–I want to provide the goods (so to speak) up front.  If you’re here simply to get a copy of the Maine Suppressor Hunting Permit Application:  Click here to download the PDF now. I will also drop the link on nearly every mention of the permit to hunt with a suppressor in Maine throughout this article.

Now for a bit of backstory: in 2015 legislation was passed allowing hunters to utilize suppressors–or (cringe warning) “silencers”–for hunting use.  This is a huge step forward for Mainers who enjoy hunting big game, but also take hearing protection seriously.  Don’t get me wrong, as a gear freak I am fascinated by the science and technology that goes into suppressor manufacturing, and just being able to shoot suppressed weapons holds a cool-factor that is enticing enough for me to want to get involved regardless of the activity.  Now, back to the real reason for this post, the fact that the State of Maine is dragging it’s feet and–to say this nicely–making it difficult for the average hunter to acquire a permit to exercise the freedom of legally hunting with a suppressor.  The image below is a screenshot directly from Maine.gov’s site, in the IFW section pertaining to Laws Pertaining to Hunting Equipment.

Seeing this sentence is enough to stop a great many hunters from pursuing this freedom even further.  I spoke with a handful of guys who I know personally (many of which being lifelong hunters) and a staggering amount of them told me: “You can’t hunt with a suppressor. It’s illegal.”.  They cited the very segment from the Maine hunting laws that is shown above.  As it happens, there seems to be a large number of hunters who either misread or misinterpret the single sentence on the subject.  Yes, that’s right, there is a single mention of hunting with a suppressor in Maine’s hunting laws; furthermore, the sole mention of a totally legal practice is written to sound as though there is a hard-to-obtain permit in order to exercise your freedom.  This drives me to think a better explanation on the matter would be helpful to Maine’s hunters.  Going a step further, I think it would only stand to reason that a link to the permit mentioned in the one sentence on the subject would be helpful.  Even the addition of “information on the permit can be found at…[insert link here]”.  The lack of effort and information seems to only further the idea that the State would rather not make it easy for hunters to acquire the permit.

In scouring Maine.Gov, and the subsection for Inland Fisheries and Wildlife, you’ll find that there is one place on the site where the form exists.  Nowhere else in the multiple sections for hunting laws, equipment, licensing information etc. will you find a path to the permit to hunt with a suppressor.  I do want to say that I reached out to Maine’s IFW on this matter, and received a reply in under twenty four hours with a link to the exact form I was looking for–although I thought it was strange that the URL (and form itself) are titled “suppressor permit release form” since it’s not just a release form–but an application as well.  I replied to the email, thanked them for their help, and expressed my concern that the average hunter may have a hard time digging up the application since it isn’t linked anywhere on their site.  If I receive a reply to my follow up with IFW I will post it at the end of this piece.

Below is a screenshot of the IFW section of Maine.gov that breaks down various categories so a sportsman may find the laws pertaining to the hunting activities he wishes to invest his time and money into.  Seeing as how suppressor use was signed into law in 2015, and the IFW website is presumably updated a minimum of once per year to keep current, it’s reasonable to expect information about hunting with a suppressor to be readily available to anyone looking to exercise that freedom.  I searched the entirety of the Hunting Laws & Rules section to no avail. 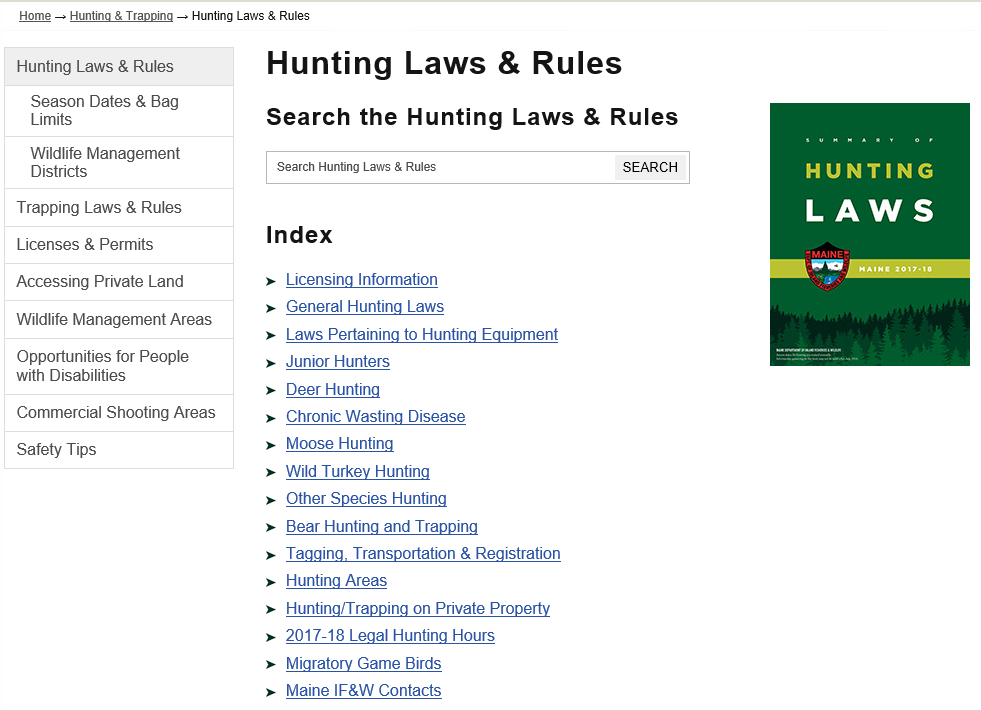 Expecting to find information on the type of permit required, I began searching through Licensing Information on IFW’s portion of the site.   Below is a graphic showing the breakdown of Other types of permits available to hunters (I expected to find the suppressor permit here since it was not listed in the above sections: you can find them here if you wish to look).  Note that the suppressor permit ($12 fee) is not shown as I write this in 2018. 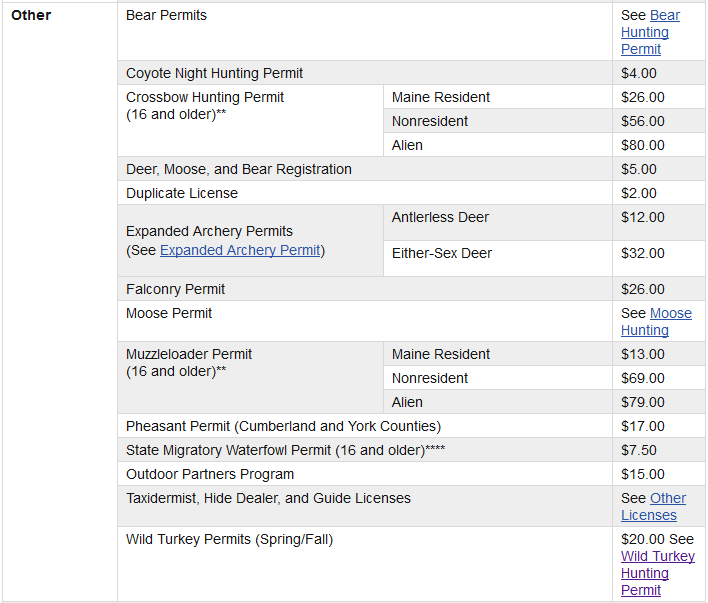 As I mentioned earlier, when I was struggling to find the suppressor permit on the website, I reached out to IFW to let them know that the process they have setup…sucks.  The systems in place to buy a hunting license, enter into the moose lottery, enter the any-deer lottery, and find other information are pretty foolproof; why can’t the same be setup for hunting with a suppressor?  I fully realize that the demand for this permit is likely to remain fairly low while suppressors themselves are not easily attainable.  Not many folks are willing to fill out the ATF Form 4, pay $200 tax, and wait the multiple months required to simply make the purchase of a suppressor; and to that end, I realize the State of Maine wouldn’t want to spend a massive amount of time changing the format of their website to accommodate a relatively new law. I don’t want to totally bash the State here, but I do feel like they are (whether intentionally or not I can’t say) obstructing the folks who do want to exercise this freedom.  Revisiting the licensing aspect of things, the State of Maine offers a hunting license called the Superpack License.  This license includes everything a Maine hunter could desire, and checks off every permit there is available…except for the suppressor permit.  Again, in my mind, the red flags are going up.  Why doesn’t the State waive the $12 suppressor application fee for superpack holders?  A superpack holder can simply enter their license number when entering the moose lottery to be entered for free–a perk of holding a $201 superpack license–but they can’t easily find and apply for the suppressor permit.  These are questions that should have been answered in 2015, not questions that are permanently dried to the whiteboard because they haven’t been answered three years after the law passed.

In the hopes of finding a clearer path to the suppressor hunting application, I did what any reasonable human would do…I went to Google.  My search results there turned up news articles from 2015 that spoke of the new legislation, and a few hits from the ASA (American Suppressor Association).  Oddly enough, the ASA’s website had more useful information than Maine’s own website.  I reached out to ASA and received a reply within the same day from Owen Miller, the Director of Outreach.  I explained my story to him, and he thanked me and went on to say that ASA is fighting to have the requirement of a permit to hunt with a suppressor removed entirely.  As a lifelong Mainer and sportsman I appreciate the efforts ASA is putting into this front.

I’ll wrap this piece up by opening the floor to anyone who wants to share experiences on this topic from within Maine, or any other state.  Suppressor hunting is a freedom shared by many states, and hopefully more in the future.  I’m fascinated by the technology behind the devices, as well as the potential benefit to hunters who use them.  Do you have a suppressor on your hunting rig?  Does your state allow suppressor hunting?  Let’s fight the noise together.

If you have a photo that pertains to this article that you would like to see featured on the site, please reach out to info@jimmychew.me to discuss.  Photo credit will be given.